What is the Advantages of RIS Technology Bushing?

The insulation layer of ChinSun RIS bushings are made from synthetic fiber in form of thin felt instead of traditional insulation paper as in RIP bushings. This kind of insulation material is relatively “purer” than paper, and not easier to absorb wet moisture. Compared with the insulation paper, the surface of the felt is somehow rough. Therefore, when the two adjacent layers are wound together, there will be some fibers cross-coupling between the two layers, which makes it easier to be impregnated, and the adhesion between the layers will be stronger after the resin being cured.

The core technology of ChinSun’s RIS bushings, such as dry rolling and vacuum impregnation, not only improve the insulation performance, but also improve the process control accuracy and shorten the producing time.

By using the renewed resin system, the capacitive core can be impregnated directly into its final shape and hardened in a short time. In addition, the drying process before impregnation is substantially shortened because, unlike paper, the polymer fibers are not hygroscopic, they absorbing much less moisture than papers. The combination of advanced material selection and improved processing capability makes RIS bushing have a substantially shortened producing time compared with RIP technology.

ChinSun’s RIS bushing technology meets all the specifications required in IEC 60137 and also the electrical, thermal and mechanical properties of the relevant IEEE standards. These bushings are characterized by a very low dielectric loss factor (tan δ typically < 0.35%), while their electrical design and defect-free impregnation process allow partial discharge free up to twice the maximum phase-to-ground operating voltage, which is specified at a PD measurement background of 2 pC. That is much better than required by IEC standard for RIP bushings, i.e. dielectric loss <0.7%, PD level of 10pC & 5pC at 1.05Uf & 1.5 Uf respectively, where Uf is the maximum phase-to-ground operating voltage.

–Suitable for Variety of Installations

Taking advantage of the excellent anti-pollution-flashover performance of silicone rubber sheds, ChinSun’s RIS bushing can be installed even in highly polluted area such as class E ( class E is defined “ severity pollution” by IEC 60815-1 (2008).) environment. In addition, due to the dry insulation and special structure of ChinSun’s RIS bushing, it can be installed in any direction, i.e., the installation angle from vertical can vary from 0 ° to 90 °.

Therefore, a lot of great work has been condensed in ChinSun’s RIS bushing, from high-precision and reasonable product designing to rigorous material selection, and even to exquisite craftsmanship. The advent of ChinSun’s RIS bushing updates the milestone of high-voltage bushings of dry type with capacitive structure. 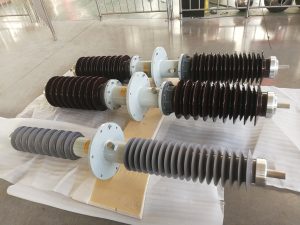